As in prior years, combination of 2 day workshops and 2 days of conference.

The RStudio official repo with abstracts for every session, workshop, and e-poster.

All the conference session recordings.

This was my third rstudio::conf and I plan to attend my fourth, in Orlando, next year.

I really knew the conference had grown when I was told that breakfast would be served in the room closest to my workshop!

The official numbers from Rstudio confirmed that a new attendance record was set. 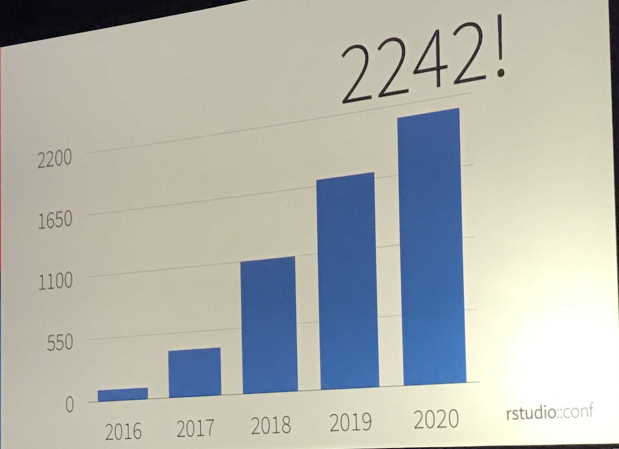 Despite the increase in attendance the event was executed flawlessly, with the exception of a short-lived wifi hiccup the first day of the workshops.

The welcoming, open and friendly community feeling was still very much present.

The talk topics were diverse and interesting - I found myself often choosing between two talks I REALLY wanted to attend. Decisions were made easier through the knowledge that all talks would be recorded and shared online.

She opened with a great example on how to do frequency analysis with just a few lines of code.

I found her knowledge of trade-offs and constraints of different tools really informative.